The History of The Celtic Club

The Celtic Club, established in 1887, has been the focal point for the past 130 years of the Australian Irish community in Melbourne and throughout Victoria. The central aim of the Club, as encapsulated in our Vision Statement, is being Victoria's major venue for the celebration and experience of Australian Irish heritage and culture whilst also extending a welcoming hand to people of all Celtic nations and the broader community. It is the oldest Irish Club in Australia.

When the Celtic Club was established on the 26th September 1887 at the Imperial Hotel in Bourke Street, Dr. Michael O'Sullivan presided over the first meeting of the provisional committee to establish the Club. From the beginning its raison d'etre was to unite, regardless of creed or Australian party politics, men who sympathized with Ireland's aspirations for Home Rule. In those early days the Celtic Club not only sponsored various social events but also some political events; many related to Irish issues. It was a time when the colonies were looking to being independent of England.

In Melbourne, in the late 1880's, many people without Irish ancestry supported Ireland's aspiration for self-government. As a result, the Club was called the "Celtic Club" rather than "Irish" for the specific intention of providing a meeting place for those people who supported the Home Rule Movement. As a result, the membership over the years has been representative of practically all Celts — Irish, Welsh, Cornish and Breton, however the majority is Irish or of Irish descent.

During and after the First World War such events concerning Conscription, the Easter Rising (1916), the War of Independence (1918-1921), the politicisation of St. Patrick Day Marches and the Irish Civil War (1921-1922) caused divisions with many in the general community and also within the Irish community itself. However, the politics of the old world with its infighting and divisions soon receded in the decades that followed and thankfully the Celtic Club was one of the few survivors from the plethora of Irish-Australian political and social organisations that faded away.

As the 20th century progressed, the Club began to assume its current form as a purely social gathering place for “respectable gentlemen”. Ladies only gained associate membership in 1978 and full membership in 1985.

A Building of their Own - In December 1959 the purchase of Monahan's New Union Club Hotel in Queen Street Melbourne for 60,000 pounds, provided the Club with a stable headquarters for the first time. Previous to this the Club had leased or rented 11 different premises within the city. This new excellent location promised business stability.

Whilst the first building on this site was the Royal Oak Hotel (C 1848), its replacement was the West Bourke Club Hotel built in 1876 by Port Phillip pioneer George Evans, and which today is the original building of the Celtic Club. George Evans, a builder, was a crew member of John Pascoe Fawkner’s “Enterprise” ship which entered the Yarra River in August 1835 to begin the settlement of the southern part of the colony of NSW at the site which is now Melbourne.

In 1993 the Celtic Club expanded their premises with the purchase of the Bird Cameron building next door from the Gas and Fuel Company for $950,000.

The ‘craic’ and good times flowed into the next great period of social change as the last quarter of the twentieth century brought the empowerment of youth, the feminist movement, the technology and education revolution and finally the disintegration of the post WW2 social conservatism. Nevertheless as fashions changed and new attractions and venues emerged membership to the Celtic Club gradually fell. Consequently questions were asked concerning the future of the Club and how to revitalise and present the Club.

In 2001 a Cultural and Heritage Sub-Committee was established to support, present and celebrate not only our Celtic culture and traditions across the broad spectrum of all Gaelic groups but also to recognise and celebrate the great and continuing Australian Irish contribution to the heritage and culture of our country since early settlement.
Whilst the traditional Irish “craic” continues, a greater variety of cultural heritage programs and performance are now included in the Club’s strategic and business plans. These include language, music, literature, art, drama and theatrical performances, cultural tours, reading circles and film groups, history and genealogy groups, sports and The Celtic Club’s Irish radio program.

Before leaving Queen Street, the Club operated a Cultural Resource Centre with an extensive Library, historical items, artefacts and paintings held by the Celtic Club, a Sound and Film Centre and a Seniors Computer Training Kiosk. The library has a comprehensive collection of over 3,000 books covering all aspects of our Irish and Australian Irish heritage, history and culture and will be an important part of our future home.

The Club also funds an Undergraduate Student History Award which is presented to the winning students of the particular faculties at the University of Melbourne, Latrobe University and Victorian University. Their winning essays are based on our Irish or Australian Irish history.

The Club has also instigated joint programs with popular and prestigious bodies including the State Library, Immigration Museum, National Gallery of Victoria, Public Records Office, Melbourne Writers Festival and Victoria’s Seniors Festival. Such initiative enables us to share with these partners, the presentation of our Australian Irish and Celtic heritage and culture to the broader community and to promote the ideals of the Celtic Club.
The Club also supports the establishment, growth and activities of Irish/Australian clubs and associations throughout the State and liaises with and has a reciprocal membership with provincial city Clubs in Victoria as well as Celtic/Irish Clubs in other States of Australia.

Members at the AGM

Members at the AGM requested the Committee of Management to undertake a feasibility study for the redevelopment of the Celtic Club. A Special Project Committee was appointed – Frances Collins (Chair), Seamus Moloughney and Andrew Perry. MacroPlan were appointed property consultants.

They decided to investigate the possibility of a multi-storey building with the bottom 4 floors to be the property of the Celtic Club rather than renovate existing old building. A Planning permit was sought. This 2 year permit added approximately $5 million to Celtic Club land value

After various expressions of interest Leighton Properties Ltd. entered into an Exclusivity Implementation Agreement (EIA) for the redevelopment of the Club for a 48 storey building and with a down payment of $100,000. Later they withdrew their offer.

7 Developers put forward proposals but only one, LEPL/Buildcorp, put a detailed proposal. Their redevelopment offer of $10 million was not accepted and then their outright purchase offer of $12 million was received but rejected by members as the Club’s Rule requirement of 2/3rds majority was not met.

86% of members voted at AGM for a sale option to be pursued and for the Club to seek re-establishment elsewhere in the CBD.

With recent improved financial possibilities a new Property Committee was set up to pursue a sale or other options. Brian Shanahan – Chairman.

In September 2016, over 75% of the Club’s members voted to accept the offer to acquire the building from Beulah International.

Leasehold of The Metropolitan acquired

In an effort to find a temporary home for Club activities, the leasehold on The Metropolitan Hotel was acquired, to add a hospitality offering alongside the Club’s William Street administration and meeting facilities. 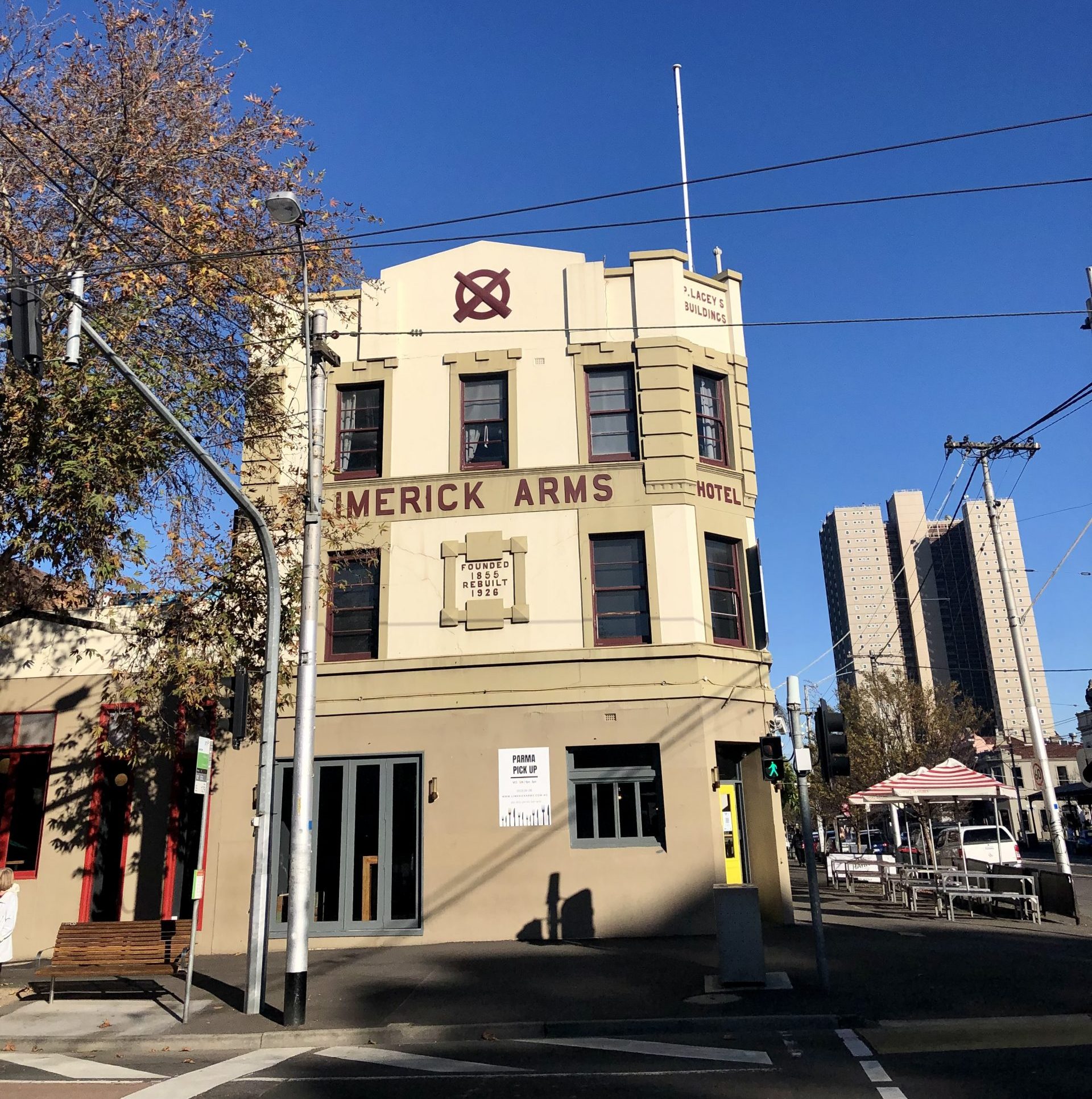 Acquisition of The Limerick Arms

The Celtic Club is taking a major step forward on 1st July in acquiring the securely leased, prominently positioned Limerick Arms Hotel in South Melbourne for $5.3million. This investment decision is a key step towards securing the financial health of the club, generating income and improving the asset base.  It will also help address the need of the club and its members to access a venue for a range of social events and activities. By itself, it is not the definitive solution for a new home for the club but represents a decisive stepping stone which addresses immediate financial and social needs.

The Limerick Arms, a prominent three-storey corner hotel at 364-368 Clarendon Street was sold by Colliers’ Guy Wells, Oliver Hay and Tom Isaksson in conjunction with Cropley Commercial’s George Iliopulos on a short settlement.

The Limerick Arms offers a securely leased investment with a quality tenant who has extensive operational experience in a variety of pubs having operated the Limerick for more than seven years. The fact that there is a quality tenant plus the genuine security offered by the lease agreement were key features considered.

We do not wish to operate the business but merely to draw the rental income that it provides to our bottom line, while exploring opportunities to collaborate with our tenant.

The Limerick Arms Hotel, positioned on 347sqm at the corner of Clarendon and Park Streets in South Melbourne, is a prominent freehold hotel situated on the doorstep of the Melbourne CBD. Public transport is excellent and the venue is also well positioned for a key segment of Melbourne’s Irish Australian community.

The prime location of the asset within the heart of the Clarendon Street retail precinct and its close proximity to the iconic South Melbourne Market, Albert Park, Royal Botanic Gardens and bayside suburbs were strong drawcards.

Written Histories of The Celtic Club

Histories of the Celtic Club include: Hugh Buggy's "The Celtic Club-A brief History”, 1947 and Dinny J. O'Hearn’s, "Erin Go Bragh - Advance Australia Fair: A Hundred Years of Growing", Melbourne: Celtic Club, 1990. Both record the key events in the Club's history and the role it played in helping Irish and Australian Irish Melbournians to become accepted into mainstream Australian culture.

Dinny O’Hearn, who died in 1993 at age 56, was an Irish-Australian literary critic and man of letters who had a long association with Melbourne University. A cast-iron fountain outside Jimmy Watson’s wine bar in Lygon St. commemorates where O’Hearn is recognized for his literary contributions and his skills as a great raconteur.

The Club was also of sufficient cultural and historical significance for the city of Melbourne to be included in Andrew Brown-May and Shurlee Swain's groundbreaking “Encyclopedia of Melbourne” – in 2005 (See Richard Scully, “Celtic Club”).

Organisations And Prominent Figures Associated With The Club

Prominent figures of the Club from its foundation to the early twentieth century who have contributed substantially to our Irish/Gaelic heritage and culture include: Morgan Jageurs, (President 1892-93 and 1918-19) who also headed Melbourne’s Irish Land League, Irish National League, United Irish League and the Melbourne Irish Piper’s Club and Dr. Nicholas O’Donnell (President 1907-11) an Irish Nationalist and Gaelic Scholar. O’Donnell became one of Australia's outstanding Gaelic scholars, writing extensively on the Irish language and politics in both Gaelic and English. His collection of Irish language books is now held at Newman College, University of Melbourne.